It all started with a jar of apple jam...

In 1975, Ryozo Kuze, a native of Tokyo, opened a ski lodge, named Kuze Pension, in Madarao Kōgen, a highland area in northern Nagano Prefecture. Two days after opening, his wife-to-be, Mayumi, stayed at the lodge as a guest, and six months later the two were married. Together, Ryozo and Mayumi ran the ski lodge together for several years. Ryozo welcomed the visiting guests and gave them ski lessons. Mayumi cooked meals and kept the lodge clean. Ryozo loved the job. Mayumi didn't.

Ryozo and Mayumi at Kuze Pension

Without a single day off for much of the year, and a strong desire to devote her time to raising their newborn son, Ryota, Mayumi had had enough. She packed her bags and went back to her parents' house in Yokohama, and took little Ryota with her. Mayumi told Ryozo, "I am not your hotel's kitchenmaid. I am your wife. I want to quit the ski lodge and focus on our family only!" Ryozo was stunned, but he wanted Mayumi back in his life, so he promised to eventually close down the ski lodge. In the mean time, while still running the ski lodge, he needed to find some other way of earning a living. Ryozo tried renting out skis, selling teaching materials, and did various odd jobs, but none of these were enough to feed his family. Plus, during this time, Mayumi gave birth to a second son, Naoki, so Ryozo really had to come up with something. Ryozo and Mayumi were now working harder than ever.

It was around this time that Mayumi went to the local produce market and noticed that they were selling large amounts of apples at a very low price. The apples, she was told, tasted great, but the shape of them was not so good, so the supermarkets didn't want them. Mayumi thought, "Why not make them into jam?" She bought them up, made apple jam and served it to the guests at breakfast. The guests loved Mayumi's jam so much that they asked if they could take some home with them. Mayumi wrapped some of the jam in small plastic bags and gave it to the departing guests. Ryozo then came up with the idea of selling the jam at area ski resorts and even asked local factories to produce it.

Ryozo often spent entire days traveling around to ski resorts, hotels and other businesses to sell the jam. He often took Ryota and Naoki with him, loaded lots of Mayumi's jam into his jeep and went out, from morning until night. This continued with some success, until finally, in 1981, Ryozo closed down the ski lodge and sold it. A year later, in Nagano City, Ryozo opened a jam shop named Madarao Farm. His new business sold a lot of jam. So much so, that some of the customers asked Ryozo, "So, where is your factory? We would like to visit it!" Ryozo was a bit stuck, since he didn't have a factory. Ryozo began to think about building a factory of his own.

When Ryozo and Mayumi ran the ski lodge, they not only had very little time off for family or for each other, but they also had very little money. They never had the chance to have a honeymoon. After moving to Nagano City and opening Madarao Farm, they finally had such an opportunity, so they left their sons with the grandparents and headed off to the Normandy Region of France. While in Normandy, they went to a village known for its apples, and saw charming little homes and cozy restaurants where couples young and old sat and dined out together. And at the center of the village was a church where families went to worship on Sundays. Having grown up in the poverty of post-war Japan, Ryozo was impressed with the beauty, richness and enjoyable lifestyle of the people in Normandy. He thought that someday, he would like to somehow recreate that look and feeling back home in Nagano.

On returning to Japan, Ryozo decided he wanted to build a jam factory, restaurant, and winery surrounded by apple orchards and vineyards. He traveled around to the chiefs of villages near where he had his ski lodge, asking them for permission to build there. He was turned down by everyone, until finally the chief of Samizu Village (in the present-day town of Iizuna) said yes. Acquiring a 16,000m2 site, Ryozo finally had a location to build, and he could now see his grand vision taking shape. He borrowed a large amount of money from the bank and began construction of his factory in 1987. 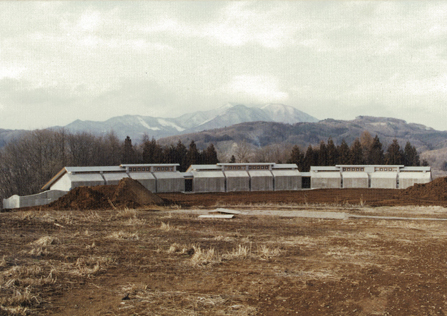 The jam factory
after construction. 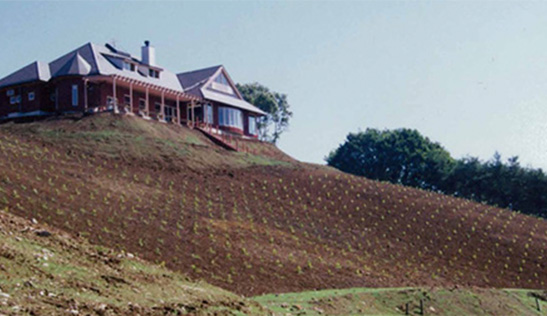 The restaurant and surrounding vineyards,
just after completion.

The winery building,
just after completion.

Over the next three years, the factory, a restaurant, and winery were built. Wine grapes were planted, and a gift shop was opened, but the economy took a turn for the worse, and Ryozo found himself in debt upwards of ¥800 million. Revenue from sales of jams and other food and beverages was not enough to cover the debt owed to the bank, and the people of the bank began treating Ryozo like a criminal. Every day, Ryozo thought that it would be good if morning never came, and began to think about dying. Ryozo came to think of himself as "a useless human being."

The Bible in Japanese,
with Psalm 119:103 highlighted.

With all the problems with money and the bank and the fear of his business failing, Ryozo couldn't sleep at night. Mayumi, who became a Christian, helped him to relax by reading verses from the Bible to him at night in bed. Ryozo heard the words and was able to relax and fall asleep. Ryozo began attending church services with Mayumi, and soon became a Christian himself.

After becoming a Christian, Ryozo worked hard to return the money he owed to the bank. Over the next few years there were several times that it looked like the end for his company, but at the last minute, there was always some sort of miraculous help that came his way. His conversion also changed how he treated his employees. In the past, Ryozo was strict and irritable and would often get angry at his staff, at Mayumi and their children. Ryozo came to realize how wrong it was to do this, and decided that from now on, he would run his company as a place with a lively atmosphere, where everyone could feel good being there.

Things started to turn around, and Ryozo's company began producing more and more jams and sauces at co-op stores and supermarkets. Then, in 1997, the company was given the opportunity to produce jams in jars imprinted with the logo of the 1998 Winter Olympics. This new development proved to be the company's saving grace, and from there, Ryozo began expansion plans. In 1999, he opened a second retail shop in Karuizawa, a popular vacation destination in Japan. Meanwhile, Mayumi began attending seminary, with the hope of becoming a pastor. Ryozo and Mayumi began leading voluntary Christian worship services in a room at the company, and Mayumi established a new set of core values and company management principles. These values, based on the Bible, emphasized love, acceptance, mutual understanding and forgiveness of everyone. These company management principles were established in 2002 and continue to this day.

The new chapel
under construction.

In 2005, a new chapel was built on the hilltop next to the winery restaurant, and the company name was changed to St. Cousair Co., Ltd. In the years since St. Cousair has grown at a rapid pace, and has broadened its horizons to include the establishment of Kuze Fuku & Co., a retail store specializing in traditional Japanese cooking. St. Cousair currently operates over 100 stores throughout Japan. In 2017, St. Cousair took a leap overseas, acquiring Berry Noir Co-Packing, a food and beverage production and distribution facility in Newberg, Oregon. The facility was re-named St. Cousair.

And all that began with a jar of homemade apple jam!

God is love, and he who abides in love, abides in God, and God in him.

Also, if you would like to read more about St. Cousair's company priciples, please visit our page, "A Christian Company."